they say not to invest too much of yourself

in your possessions and instead to invest in people.

though sometimes I find it hard to believe,

at least the things you own can never leave,

while those people in which you invest

more often than not leave a hole in your chest,

boy, why do you wear that frown?

the rock on which I used to lean

now just weighs me down.

at night it feels like my heart could bleed

so i’ll sit tight and smoke my weed.

I miss you now

I have to close the door.

she asked me tonight

why I’m never sober when I call.

how could I explain to her that

I still need that little bit of liquid courage

every time I want to talk to the only girl

who somehow after three years

still makes me as nervous as

I stay up at night

waiting for something that

It’s been so long

most nights I forget

What exactly it is that

I am waiting for

But when I do

And I think of you

Because no longer are you beside me

and I miss your smile

that welling in my chest

that gave me the strength

to take on the world,

just you and me. 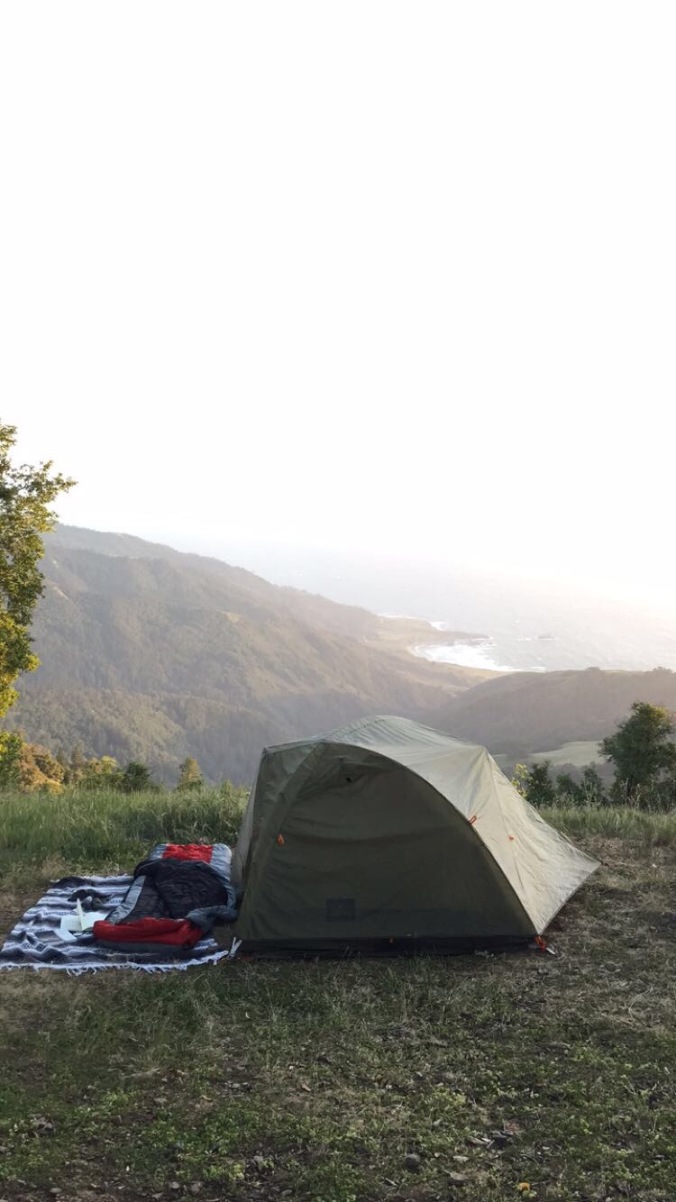 Tonight I’m sleeping on
the side of a mountain with
with the most amazing view
but for some reason I can’t stop hearing you
tell me that it’s time for the turn in
And can’t stop myself from wanting
to feel your body against mine,
to smell you hair,
to hold your hand,
to hear that funny little laugh of yours
just one more time.

For some of us will never settle.

For my media writing class I was assigned the task of writing an adapted version of a scene from a short story we read in class. I had group members, two of them actually. We didn’t swap phone numbers in class though so we had zero means of communication. Group projects are always fun.

7 paragraphs to 7 pages. The story is titled, “Love is a Fallacy” by Max Shulman.

Love is a Fallacy (Scene 4)

A VERY brief screenplay I wrote last night around 1AM. I was tired and primarily focused on learning the screenplay software. I plan on writing around 3-4 vignettes of this length per week to keep the mind sharp. Enjoy. 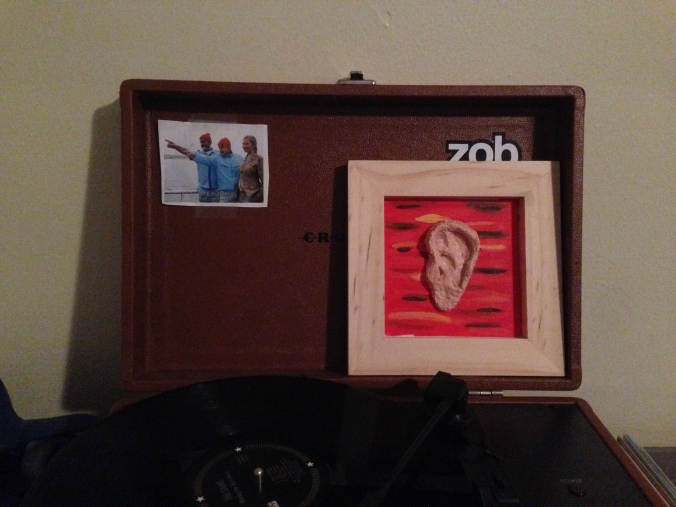 So this is what I came up with for my art final. A paper mache ear mounted on a wooden frame featuring some acrylic paint. I mean it looks kind of cool in the right light.

The boredom… Sometimes it’s almost too much to handle. My work keeps me busy most days, but it usually isn’t enough to allow my mind to elude the fact that I am floating alone in space. Up here only three things exist: me, this piece of shit assortment of aluminum they call a habitable satellite, and an endless vacuum.

The solitude in my job description is the type that makes you realize that a sunset is only beautiful when you have someone to watch it with. To be quite honest, it is something no amount of training can prepare you for. Waking up each an every day to remind yourself that the nearest human is 230 miles away and would be lucky to spot you soaring across the night sky; not even the view of our beautiful Earth from my little porthole window makes it worth while. I’m Elton’s Rocketman.

It may have been drinking water in space that made me lose sight of the big picture. Maybe it was sleeping in zero gravity, or some other impertinent trick NASA had up their sleeve. Those are the things that draw you in, but hardly the reason anyone stays. No, we stay because we have no choice. How’s that for morale for ya? Because at this point morale can lick the heel of my boot. You know the kind I’m talking about, the one that left the print on the moon. The one that took one giant leap for mankind. That’s another thing they don’t tell you, not every astronaut gets to be Neil Armstrong. He got to walk the moon. I analyze weather patterns. TOE-MAY-TOE, TOE-MAH-TOE.

Tomorrow will be my five hundredth day aboard Habitat III. And in 500 days, you’d be surprised with the ways I’ve found to pass the time. I watch the condensation from my breath race down the windows, count the number of seconds it takes  to orbit the Earth, learn to draw the world map from memory. But most importantly, I’ve become a god damn wizard of preparing instant meals. The perfect temperature every time, guaranteed. These are now the things that excite me.  The occasional video transmissions help me maintain my last threads of sanity. In the end though, that face is just another screen. Skype had a fantastic marketing team.

I work, I work out, and I sleep. Things run smoothly as long as can keep my mind from wandering. Dreams are about as close as i get to any human interaction these days. I’ve started to feel a strong disconnect from the world below me, one that exceeds just distance; it’s a brutal realization, that it all keeps running so smoothly without you.

Have you ever taken a moment to imagine what a mushroom cloud might look like from space? Unfortunately, its quite an amazing sight. The chaos, something unfathomable from where I am sitting. I think it was New York; it could have been DC, the East Coast was almost at the horizon line when I saw the flash. Within an hour there was another somewhere in the Middle East.

By the end of the day I had lost all contact with planet Earth. Had every station really been destroyed? I kept a tally going, 22 mushroom clouds within ten hours. Russia, England, France, China, North Korea, Iran, the United States. All facing a kind of destruction the Earth was never made to endure. There was no way of knowing what happened, but even more terrifying was the thought of what was going to happen. To me, trapped in this satellite with no means of communication. To the people at home that I love, who may have perished in the explosions. To the rest of the world, whomever is left.

The place I once thought to be a prison is now a sanctuary. Despite the isolation, here I am safe.

The flashes continued for the next several days, bursts of light tearing through the dark abyss. The frequency waned until they finally ceased on the seventh day. What was left of society? I couldn’t help but recall the way a nuclear apocalypse was depicted in the movies: The Road, Book of Eli, Mad Max. Some days though even that world seemed more appealing than this lonely vessel. At least there you can still find people. I have become trapped in space.

The sun set more slowly than usual that night, illuminating the sky with streaks of orange and gold that shone with a light only comparable to the bonfire, now crackling before me. The image was something out of a dream. For a moment I forget Rusty is a Jack Russell, “Isn’t it amazing?” His panting response reminds me that I’m talking to a dog.

Some people would regard sitting on the beach at sunset with a joint between your lips and a dog in your lap as a sad, lonely existence. To me it’s nothing short of heaven. I guess it doesn’t work against me that I live on the oldest of the Hawaiian Islands, Kauai…the Garden Isle. If you had to describe the place as a whole by listing just one of its attributes, it’d be that no building is permitted to rise above the tallest palm tree on the island.

In front of me lay the gem of the north shore, my own little slice of Heaven, Hanalei Bay. She makes my heart flutter today the same way she did the first time I laid eyes on her 20 years ago. Granted I was merely an infant nibbling grass at the time, it was something about the way the sun lit this place up that kept bringing me back. It wasn’t until after I graduated high school that I realized it was exactly where I needed to spend the rest of my life.

I can remember my last night at home almost too vividly…

It was the first time I had ever ridden a bus with seatbelts. Not that anybody actually planned on using them. Maybe the kids in the first few rows would, in the same manner that a dog rolls onto it’s back, under the eyes of the teacher seated at the front of the bus. The kiss asses mixed throughout would do the same.

A group of 20 or so PTSA moms spent the hour prior to our departure trying to black out the windows on the bus to make our destination a surprise, as if they assumed we wouldn’t be able to look out the front windshield. Hearing the rain pour down on the bus without being able to see it created a sound that added to the chaos of the lacrosse players doing their best rendition of Journey’s “Don’t Stop Believing”. Was that in fact the Second Circle of Hell? No, the kid avidly playing Flappy Bird across the aisle from me was too happy for that to be possible. Close though.

I was seated far back enough on the bus to have a hard time seeing who was leaving their seat in the second row. The suspension on this half a century old, yellow sardine-can must have been non-existent. One bump in the road sent the individual stumbling onto the shoulder of the driver, the poor man’s mustache writhed in frustration as he let out a slew of curses so far under his breath that it was no longer English. People speaking in tongues? Check. Alex, our school’s ASB president regained his balance with a quick mountain pose, and began to speak. I don’t think a single person there gave a shit about what he had to say, he was only up there because he gets off to the sound of his own voice; the type of kid that talks to you just look at his own reflection in your eyes. It’s funny the way that the reds and yellows of hundreds of taillights, blurred by the rain on the windshield, started to resemble a roaring fire behind him.

It didn’t have to feel like Hell, it was Grad Night after all. But graduating high school left me with a few dismal realizations about the world we live in: No longer are a 3.6 GPA and a 2050 on the SAT adequate criteria to get into any of your 5 dream colleges, you can’t always be with the person you love, and a one way plane ticket isn’t always half the price of round-trip.